Emotional Intelligence Has 12 Elements. Which Do You Need to Work On?

HBR – Emotional Intelligence Has 12 Elements. Which Do You Need to Work On?

Because they’re focusing only on Esther’s sociability, sensitivity, and likability, they’re missing critical elements of emotional intelligence that could make her a stronger, more effective leader. A recent HBR article highlights the skills that a kind, positive manager like Esther might lack: the ability to deliver difficult feedback to employees, the courage to ruffle feathers and drive change, the creativity to think outside the box. But these gaps aren’t a result of Esther’s emotional intelligence; they’re simply evidence that her EI skills are uneven. In the model of EI and leadership excellence that we have developed over 30 years of studying the strengths of outstanding leaders, we’ve found that having a well-balanced array of specific EI capabilities actually prepares a leader for exactly these kinds of tough challenges.

There are many models of emotional intelligence, each with its own set of abilities; they are often lumped together as “EQ” in the popular vernacular. We prefer “EI,” which we define as comprising four domains: self-awareness, self-management, social awareness, and relationship management. Nested within each domain are twelve EI competencies, learned and learnable capabilities that allow outstanding performance at work or as a leader.

In order to excel, leaders need to develop a balance of strengths across the suite of EI competencies. When they do that, excellent business results follow.
How can you tell where your EI needs improvement — especially if you feel that it’s strong in some areas?
Simply reviewing the 12 competencies in your mind can give you a sense of where you might need some development. 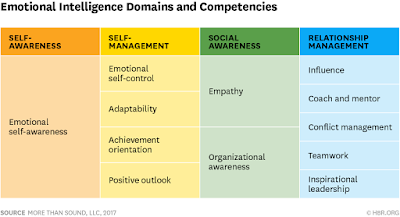 We recommend comprehensive 360-degree assessments, which collect both self-ratings and the views of others who know you well. This external feedback is particularly helpful for evaluating all areas of EI, including self-awareness (how would you know that you are not self-aware?). You can get a rough gauge of where your strengths and weaknesses lie by asking those who work with you to give you feedback. The more people you ask, the better a picture you get.

Formal 360-degree assessments, which incorporate systematic, anonymous observations of your behavior by people who work with you, have been found to not correlate well with IQ or personality, but they are the best predictors of a leader’s effectiveness, actual business performance, engagement, and job (and life) satisfaction. Into this category fall our own model and the Emotional and Social Competency Inventory, or ESCI 360, a commercially available assessment we developed with Korn Ferry Hay Group to gauge the 12 EI competencies, which rely on how others rate observable behaviors in evaluating a leader. The larger the gap between a leader’s self-ratings and how others see them, research finds, the fewer EI strengths the leader actually shows, and the poorer the business results.