How to Be an Anticapitalist Today

How to Be an Anticapitalist Today | Jacobin 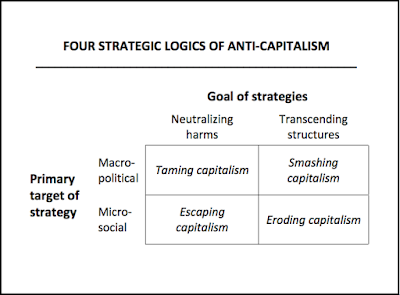 1. Smashing Capitalism
The argument goes something like this: the system is rotten. All efforts to make life tolerable within it will eventually fail. From time to time small reforms that improve the lives of people may be possible when popular forces are strong, but such improvements will always be fragile, vulnerable to attack and reversible.

The idea that capitalism can be rendered a benign social order in which ordinary people can live flourishing, meaningful lives is ultimately an illusion because, at its core, capitalism is unreformable. The only hope is to destroy it, sweep away the rubble, and then build an alternative. As the closing words of the labor tune “Solidarity Forever” proclaim, “We can bring to birth a new world from the ashes of the old.”
…

It is one thing to burn down old institutions; it is quite another to build emancipatory new institutions from the ashes.

Why the revolutions of the twentieth century never resulted in robust, sustainable human emancipation is, of course, a hotly debated matter.
…

To actually transform capitalism, visions that resonate with anger are not enough; instead, a strategic logic that has some chance of actually accomplishing its goals is needed.

2. Taming Capitalism
Here is the basic argument. Capitalism, when left to its own devices, creates great harms. It generates levels of inequality that are destructive to social cohesion; it destroys traditional jobs and leaves people to fend for themselves; it creates uncertainty and risk for individuals and whole communities; it harms the environment. These are all consequences of the inherent dynamics of a capitalist economy.
…

The idea of taming capitalism does not eliminate the underlying tendency for capitalism to generate harms; it simply counteracts their effects. This is like a medicine which effectively deals with symptoms rather than with the underlying causes of a health problem.
…

Globalization has made it much easier for capitalist firms to move investments to places in the world with less regulation and cheaper labor, while the threat of capital flight, along with a variety of technological changes, has fragmented and weakened the labor movement, making it less capable of resistance and political mobilization. Combined with globalization, the increasing financialization of capital has led to massive increases in wealth and income inequality, which in turn has increased the political leverage of opponents of the social-democratic state.
…

Intentional communities may be motivated by the desire to escape the pressures of capitalism, but sometimes they can also serve as models for more collective, egalitarian, and democratic ways of living.…

The Do It Yourself movement and the “sharing economy” may be motivated by stagnant individual incomes during a period of economic austerity, but they can also point to ways of organizing economic activity that are less dependent on market exchange
…

4. Eroding Capitalism
It is grounded in the following idea: all socioeconomic systems are complex mixes of many different kinds of economic structures, relations, and activities.

Existing economic systems combine capitalism with a whole host of other ways of organizing the production and distribution of goods and services: directly by states; within the intimate relations of families to meet the needs of its members; through community-based networks and organizations; by cooperatives owned and governed democratically by their members; though nonprofit market-oriented organizations; through peer-to-peer networks engaged in collaborative production processes; and many other possibilities.
…

The idea of eroding capitalism imagines that these alternatives have the potential, in the long run, of expanding to the point where capitalism is displaced from this dominant role.
…

Real utopias
… turns eu, which means good, and ou, which means no — into “u” and placing this before the Greek word for place, topos.
U-topia is thus the good place that exists in no place. It is a fantasy of perfection.

How then can it be “real”? It may be realistic to seek improvements in the world, but not perfection. Indeed, the search for perfection can undermine the practical task of making the world a better place. As the saying goes, “the best is the enemy of the good.”

There is thus an inherent tension between the real and the utopian. It is precisely this tension which the idea of a “real utopia” is meant to capture. The point is to sustain our deepest aspirations for a just and humane world that does not exist while also engaging in the practical task of building real-world alternatives that can be constructed in the world as it is that also prefigure the world as it could be and which help move us in that direction.