Almost a couple of months ago he mused in Things I’m Thinking about in Healthcare (part 2) –bold is mine very likely–:

Tech as a Tool vs. Tech as a Priority

In the first wave of digital health, we saw a lot of companies build tech tools, hardware, SaaS products, and more with existing incumbents as the buyers.

Turns out there are a few problems with that. Sales cycles are really long, you’re playing in someone else’s sandbox and are dependent on their data, it’s hard to scale because many times you have to do some form of custom implementation or training, etc.

But if you really believe your tool is better and something an incumbent can’t easily build themselves, isn’t there more upside to competing with them than selling to them? I actually think one of the edges new companies have is they are a more attractive place for talented tech operators to work. How many great engineers do you know want to go work for or with the existing healthcare giants? Creating new businesses that puts this engineering and technology paradigm shift at the core of its culture is something healthcare giants will have a hard time doing.

This is why my bet is that the biggest winners in healthcare going forward will be ones that:

An area I see this a lot nowadays is AI —plug-in tools designed to optimize some efficiency, do some analytics, or help find answers faster. But how many plug-in solutions have you seen that scale in healthcare generally? How much time is spent structuring and cleaning data from different sources? Watson, a trusted brand with an enormous sales force, is a case study on the difficulties.

“At hospitals that don’t link it with their medical records, more time must be spent typing in patient information. At Jupiter Medical Center in Florida, that task falls to nurse Jean Thompson, who spends about 90 minutes a week feeding data into the machine. Once she has completed that work, she clicks the “Ask Watson” button to get the supercomputer’s advice for treating patients.”

Watson’s story with MD Anderson also highlights another issue — when things goes wrong, who is to blame? Not owning the full stack exposes a company to failure in things outside of its control. If you believe in your technology, then to maximize it you want to control the inputs and benefit in the full-financial upside if it’s better than the competition.

I expect the next group of successful digital health companies will be competitors to the incumbents as opposed to tools for them, AI included.

Flatiron became a valuable company because it structured and cleaned data that existed in EMRs as well as even messier data including doctor’s notes, radiology reports, and lab results.

Healthcare is absolutely chock-full of areas where there are zero data standards, data is messy, or data is fragmented.

This is why I’m always skeptical of startups that claim to take data from a bunch of different unstructured sources and produce results. One route is for them to create a custom solution for each client. That would include A LOT of data scrubbing and so be hard to scale. Or the solution they’re building is so simple that it’s not super-defensible.

On the side of the client, it’s risky to partner up with a startup that may be a flash in the pan, especially if the time and cost of implementation is really high.

I think we’re much more likely to see success stories from companies using “home-built” AI on their own data.

One area we’re seeing this is in medical devices, where new companies are using AI on top of the data they capture to detect anomalies in their own specific data streams that are associated with specific diseases.

I get why a lot of these AI startups would want to sell to corporates and plug-in to their data though, the AI zeitgeist just keeps increasing. We analyzed earnings transcripts for mentions of big data vs. AI, including specific terms associated with AI.

AI is not the next «big data». It’s an order of magnitude more than that. 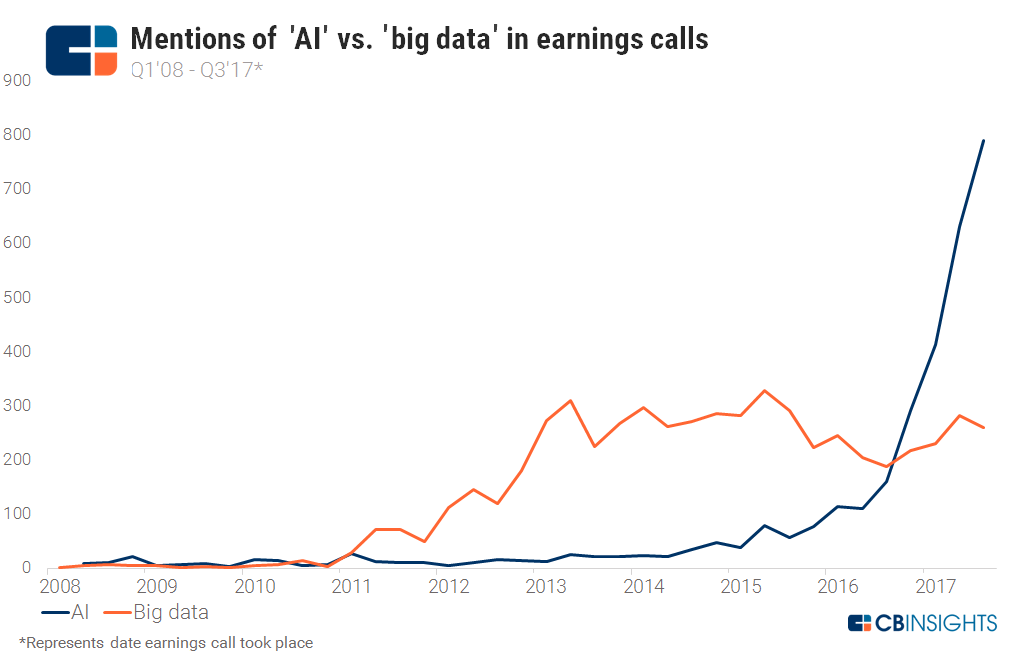