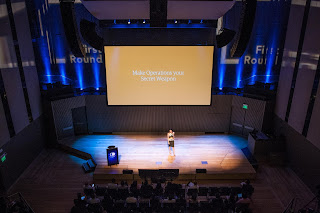 Kozlowski is part of a new crop of COOs who are harnessing know-how from a range of roles to create systems that elevate the entire company. At places like Evernote and Alibaba, she’s held leadership roles in global expansion, marketing, public relations, customer experience and business development.
We’re all familiar with tech operations, but what COO really means, is business operations: how you operate your business, think about strategy, and move the business forward in growth,” Kozlowski says. “The COO role is custom to every company and requires deep self-awareness from the CEO and founder to outline the specific skills and qualities they need in a partner.”

The Five Traits of an Operations Champion
1. Trust. There’s a reason why this word is referenced a lot in business — but it’s especially critical between the CEO and COO, given how synchronized they must be while making decisions on the fly. “You can’t run a business with someone who is supposed to be your other half if you don’t have an honest relationship with them. Period.

2. Proven Execution. The best operators are relentless doers. “You’re not looking for one-hit wonders, but those who reset to jump hurdle after hurdle. Consider asking them what and how they’d contribute first at your company. Look for clear answers rooted in proven strategies and tactics.”

3. With a COO, you want a person who is poised to lead her position, not leap in position. Ego checked. According to Kozlowski, the best operations leaders are humble, hungry and ready to work.

4. Chemistry with the CEO. COOs are true partners, not colleagues. The adage ‘don’t hire who you like, hire the person who can do the job’ doesn’t entirely apply to the COO role. Kozlowski advises founders and CEOs to be forthcoming about the relationship they envision having with their COO.

5. Versatility. Adaptability must be their default mindset. “Your COO is second in command and will be your team’s go-to when you’re not in the office. They should exude similar leadership traits to the ones you possess so your team feels confident relying on them — and the business doesn’t skip a beat,” says Kozlowski.

As you identify these key qualities, also be aware of the following red flags. According to Kozlowski, your operations leader is not:
-The CEO. This goes back to the ego check. Your COO must accept and internalize that their job is to run the plays, not call them.
-A babysitter. A COO is not a nanny or handler for a CEO. Sadly, this is a disturbing trend and one that is destined to fail the duo — and the company. Do not hire a babysitter.
-Someone who needs a ‘C-title’ to join. If you need to add Chief to a candidate’s title to persuade them to join, don’t add them at all.

Before a COO can be a possibility for a CEO and startup, it must first be on the radar. Start with a short self-assessment of your strengths and weaknesses as a CEO or founder. Complement that with perspectives from your existing executive team and advisors. Define your counterbalance and use the seven types of COOs as a tool. When interviewing look for the five traits needed for any type of COO and beware the three most common red flags. Hire a COO immediately if you are building a physical product, and after product/market fit, if you are working with a digital offering. Be as conscientious in integrating the COO as you were in hiring her. Your approach will either propel or dispel her reason for being there.